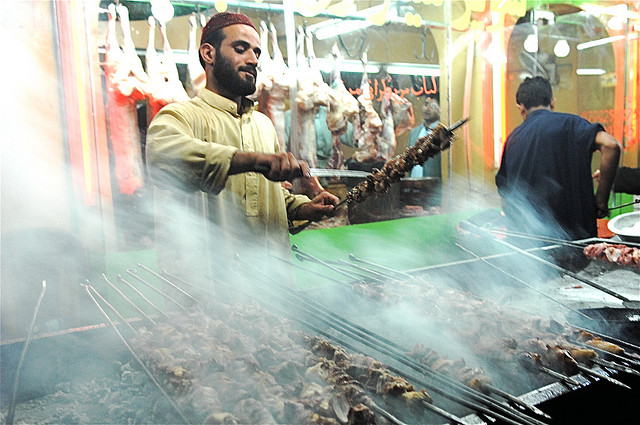 Sun’s out, barometers are swinging into action, a lot of whiter-than-white legs have suddenly gone on show (along with the depressing realisation that the playsuit has remained ‘in vogue’ for yet another year), and every pub garden in the land is rammed. Must be time for the official launch of that strange institution, the British BBQ season…
Hopefully you’ve all got your copies of Snackistan out – doesn’t matter if they get a bit of grease or charcoal on them, as cookbooks are meant to be used – but in the meantime, here’s some meat-on-sticks to inspire you. Chopan kabob is a bit of a regional speciality in Afghanistan. The lovely Helen Saberi (our expert on all things Afghan) explains it thus:

The kebab is supposed to be named after shepherds (chopan) who rubbed chunks of lamb on the bone with plenty of salt, skewer the meat on twigs or small branches, and roast them over fire while watching their flocks.

This recipe is a little more elaborate, but still a doddle to prepare. But then most meat-on-sticks is…
Ingredients (for 4):

Mix the yoghurt with one of the onions, plus the garlic, coriander, oil and seasoning. Add the lamb chops, rubbing the marinade in with your hands, before covering and leaving in the fridge for at least 2 hours, if not overnight.
When you are ready to cook, heat your coals. Shake the marinade from the cutlets and then thread them onto skewers interspersed with strips of pepper. Sprinkle with a little extra salt if you’re a salt-head like Mr. Shopkeeper. Then thread the remaining onion, tomato and shrooms on another skewer. Cook the lamb sticks for around 3 minutes a side – and the vegetables for around half that time. Serve with warm bread and thick yoghurt. Noshe Jan! As we say in Peckham. Enjoy!

Action ‘meat-on-sticks’ shot captured by Afghanistan Matters via Flickr under the Commercial Commons Licence for Commercial Use.

3 thoughts on “Meat-on-Sticks Photo of the Month: Chopan Kabob, Afghanistan. With added recipe.”