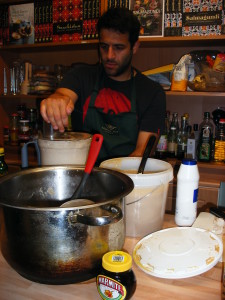 I bet the title of this recipe made you do a double take. But it’s a bit of a no-brainer really, as tahina and Marmite both have that kind of umami thing going on. And tahina is awfully like peanut butter, which is on kissing terms with Marmite. So there you have it. Mrs.S. is a Marmite lover anyway, and making 12kg of plain houmous each week can be pretty tedious, so it was only a matter of time before she created this. It is, frankly, sensational. And even if you’re a hater rather than a lover the ingredients have a synergistic effect on each other so you should totally give it a try anyway.

We actually got Junior (aka Mr.S.’ kid brother) to make the houmous this time as he is getting hitched in less than a fortnight and we have been working on his domestic skills portfolio for weeks. The boy done OK.

Houmous bi Tahina bi Marmite
To make just enough for today – should serve 4-6 people
The most important thing about houmous is that you eat it fresh. I write as someone who has worked her fair share of Mediterranean kitchens: anything that could be made ahead in big batches always got my vote. This recipe isn’t one of them; after a night in the fridge it can start to acquire a tang. I would also advise against cheating by using canned or jarred chick peas – they never have the same flavour. I actually like houmous while it is still slightly warm.
Ingredients:
200g raw chick peas, sorted through, washed and soaked overnight
a pinch of bi-carb
4 tablespoons tahina
2 tablespoons Marmite
2 tablespoons really good extra virgin olive oil
juice of 2-3 lemons
about 4 cloves garlic
salt and pepper to taste
to serve:
olive oil for frying
paprika
Right. Reserve a handful of soaked chick peas, put the rest in a pan, cover them with (UNSALTED) water, add the bi-carb and bring them to the boil. Turn down the heat, allow to bubble for around ten minutes and then skim off any foam or detritus that has risen to the top. Cook for a further hour or until they are soft and can easily be squidged between finger and thumb. Do not drain, but remove the pan lid and leave them somewhere for half an hour or so to cool a tad.
You can do the next bit by hand – but it is so very much easier with a blender. Ladle about half of the still warm chick peas into the blender goblet, including quite a bit of the stock. Add half of the tahina, Marmite, olive oil, lemon juice and garlic, and blend until smoothish, adding more of the stock if the mixture is too solid. Repeat with the rest of the ingredients, and then mix the two batches together well and season to taste.
Heat a little olive oil in a pan and fry the remaining chick peas, stirring constantly, until they are golden and crisp to bite. Drain them on a piece of kitchen towel and then roll them in a little salt.
Serve the houmous on a plate/s – if you bash the bottom of the plate against the palm of your hand the dip will spread evenly across the surface. Sprinkle the fried chick peas across the houmous, and follow it up with a pinch of paprika.
Serve as a dip (with Marmite toast soldiers, of course) or a sauce or a sandwich filling (with plenty of cress).