For 4
I hardly dare call this a recipe. Surely we learn to bake potatoes at the same time as we make our first butterfly cakes and boiled eggs with soldiers…? But a book about Middle Eastern snacks and street food would be incomplete without mention of the wonder that is kumpir. In the end we settled for posting it here instead of actually printing it.
Anyway, the concept offers both thrift and fun, commodities which are often in short supply in the mid-week food department. Great for when the kids bring friends round for tea (do kids still do that? I do hope so).
Iranians enjoy baked potatoes in the street just about as plain as plain a tatty can be: they are baked in the embers of a brazier, and then served with just salt and golpar, only occasionally being shown a knob of butter.
But the Turks have turned them into an art form, especially in Istanbul where there is a whole street dedicated to spud vending. Backpacker heaven.
The potatoes used are humungous, and they are filled to overflowing with all manner of naughty and nice-ness. Here, for what it’s worth, are a few pointers…
You will need:

AND a selection of the following, thus offering an excuse to empty your cupboards and fridge:

…you get the picture. You could also add chopped frankfurters, tuna, ham….
Prick your potatoes (to let the devil out, apparently) and bake them at gas mark 7 (220˚C) for around 45 minutes or until they are crispy on the outside and soft in the middle. Spread out all your optional toppings on the table, meze style.
When the spuds are done, cut them lengthways and mash the insides thoroughly with butter, salt, pepper and cheese. Let the assembled masses create their own edible artworks. And then stand back and marvel at your empty fridge/full wallet.

Ortakoy Street in Istanbul: image (used with thanks under the Flickr creative commons licence) from Alif Ayiter. 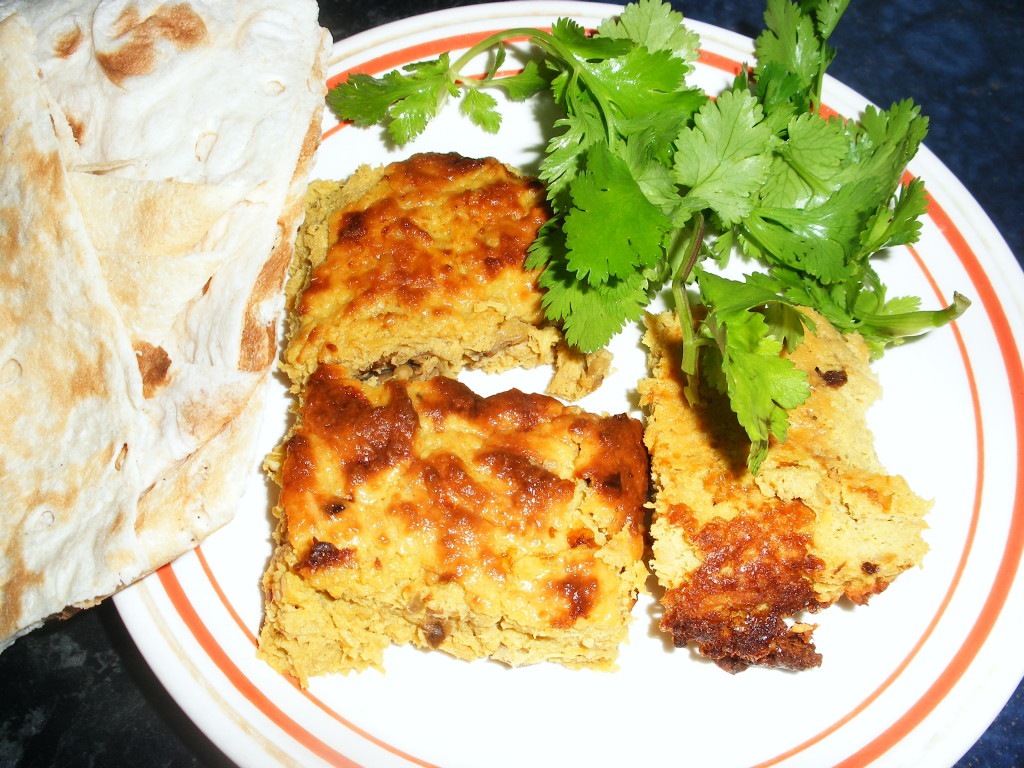 This is one of my mother-in-law’s current favourites, and as I have dedicated Snackistan to her (shh – don’t tell her – it’s a surprise), it seemed appropriate to kick off with her recipe therein.

Kookoo are a whole range of egg based Persian snacks, ranging from sweet omelette like creations to herb and aubergine croquettes. They are perfect snack fodder: eat them with bread for breakfast, lunch or dinner, take them to school or on picnics, or just stand and scoff them as they come out of the oven/pan. This one is dead easy, as it is just squidged together and baked – there is no hanging over a sizzling frying pan, or trying to shape stuff to look pretty. And it is ridiculously moreish: Afi (the aforementioned m-i-l) makes a whole load and hides them in different tubs in the fridge so that at least a few survive through to the next day. It is unfortunately only a matter of time before some major (plastic) sandwich chain cotton on to how good they are and corrupt them beyond recognition. The McKookoo? The Kookoo Sub? The Kookoo King? You read it here first.

Verim? (Which is Persian for ‘Shall we begin?’) Sprinkle the aubergine slices with salt, and sandwich them between two pieces of kitchen towel: leave for around twenty minutes before wiping off all the moisture that will duly have been extracted. Heat the oil in a pan, and fry off the onion, garlic and aubergine until the former is soft and browned, and the latter cooked through. Set aside to cool.
Next mash the cooked chicken with the spices and seasoning, and then pound in the cooled aubergine mixture – probably easiest to do all of this in a blender. Finally stir in the eggs.
Grease a large oven tray (we use one that is roughly 38cm x 24cm) and press the chicken mixture into the bottom: it should form a flat layer around 2cm thick. Cover with foil and bake in a pre-heated oven (gas mark 6/200 C) for around 25 minutes, then remove the foil and give it another 15 minutes or until the top of the kookoo is firm and golden in colour. Cut into squares (or strips, or hexagons or whatever) whilst still warm. Hide it carefully from your all-devouring progeny and ration as required.